In a historically first and probably also one-time resolution, Paraguay's parliament has decided AGAINST the declaration tabled by the governor of Caazapá, according to which the president (chairman of the board) of RELJUV S.A.E.C.A. should be made persona non grata (undesirable person) in the city of Caazapá.

The illegal, immoral and inconsistent with the will of the people of Caazapá, some corrupt councilors failed because the mayor of the city refused to sign (ratify) this declaration.

Immediately a nationwide wave of declarations of support for RELJUV S.A.E.C.A. out with simultaneous conviction of the governor, who has to fight even the most serious allegations of corruption. He is suspected of having put a large part of the food allowance for schoolchildren in Paraguay in his own pocket since the beginning of the COVID crisis. No wonder this man doesn't like us ...

In the resolution passed unanimously by the Chamber of Deputies, RELJUV S.A.E.C.A. and the president of the company, Dr. Juan Buker expressed their unreserved trust. RELJUV and Dr. Buker are recognized for their social commitment.

The MPs insisted on writing clearly and unequivocally to these countries in personal letters to the ambassadors of Argentina and Germany how much RELJUV S.A.E.C.A. and Dr. Buker are valued in Paraguay.

Declaration by the Spanish Chamber of Deputies 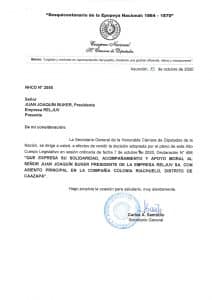 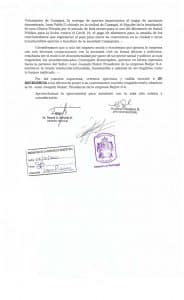 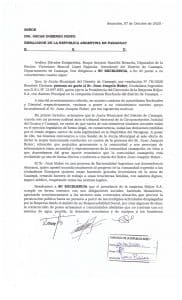 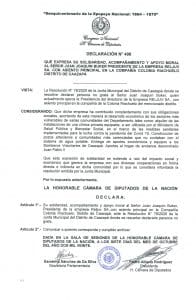 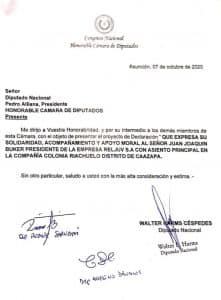 Statements by the Chamber of Deputies

Mr. Juan Joaquín Buker is an Argentine citizen of German origin who has lived in the Caazapá district - in the Caazapá department - for several years. He is a citizen who is committed to his community, a businessman who creates jobs for many compatriots and who permanently demonstrates exemplary solidarity.

He has rented the premises of a fully equipped private clinic that can be used by the Ministry of Health as part of the health measures in the fight against Covid-19 in the Caazapá district; He has promoted the construction of artesian wells and donated them to poor communities that have no drinking water system.

He is distinguished by the constant provision of donations and equipment to the volunteer firefighters of Caazapá. He constantly donates money and goods to the John Paul II retirement home in Caazapá and he does other solidarity campaigns recognized by the entire community.

This citizen (note, Dr. Juan Buker) had the "bad idea" to criticize the management of the community for the allocation of school meals by the companies affiliated with Mr. Rodolfo Friedmann, which is why the Caazapá district council took an absolutely arbitrary, illegal act and decided, with obvious political overtones, to declare him to be a person who is not liked (persona non grata - undesirable person in caazapá). Therefore, Mr President, from this Chamber we want to rehabilitate Mr Juan Buker's career and good name. In addition, with the support of Mr Roque Sarubbi and Mr Avelino Dávalos, and in my capacity as President for Foreign Affairs, we would like to ask the plenary for permission to adopt a draft declaration by which this plenary expresses its solidarity and support for Mr Buker .