Situated in the center of South America and in the heart of Paraguay – close to the provincial capital Caazapá – our settlement with a total size of 1597 hectares (more than 6 square miles) is being developed with lakes, canals, settlements and villages.

Dedicated to all “woke” people from everywhere in the world, El Paraíso Verde has thus far primarily attracted Europeans since August 2016.  This is because almost all videos and websites have so far been published in German.

Until Spring of 2020  we have property owners mainly from Germany, Austria and Switzerland, as well as Dutch, Belgian and French settlers. Requests to buy land are being received from Paraguay, the USA and Canada. Since being multicultural is our goal, we are especially inviting people and families from the USA and Canada to join the largest “alternative community” in South America, perhaps soon to be the largest in the world.

El Paraíso Verde was planned as a settlement for 6000 people with several “villages” and a city center. The gigantic infrastructure of the more than 4 km2 (1.54sq miles) settlement area was designed from the beginning to allow for possible expansion, to welcome more than 20,000 settlers .

In the event of drastic geopolitical change, an influx of close family members would therefore not go beyond the scope of this monster project. The main settlement area contains about 360 residential hectares, of which more than half have already been sold. The rest of the village is dedicated to public recreational areas. More settlements can be created within the more than 6 square miles that have already been bought by the founders. 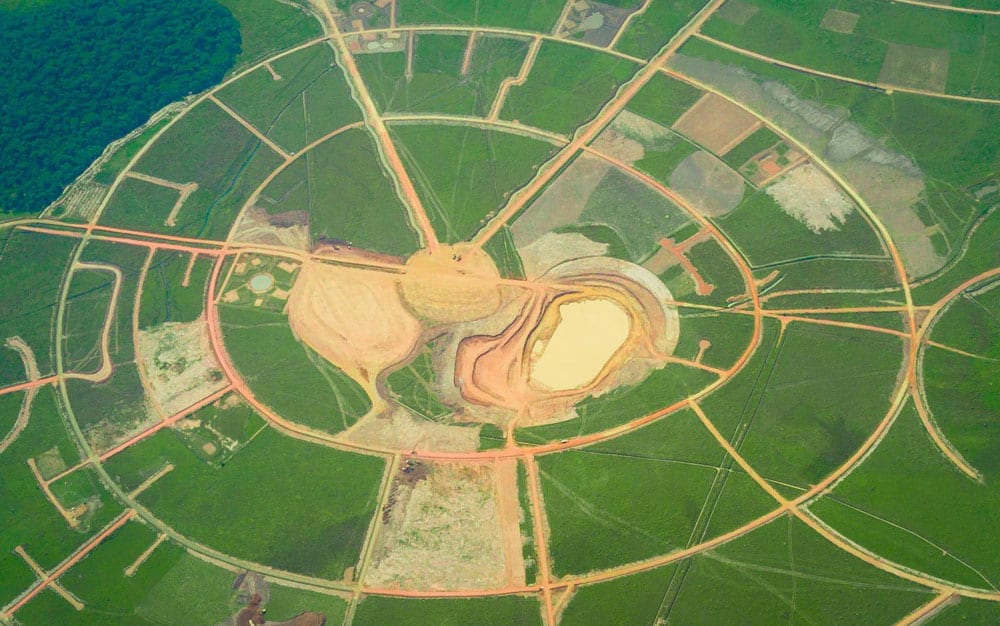 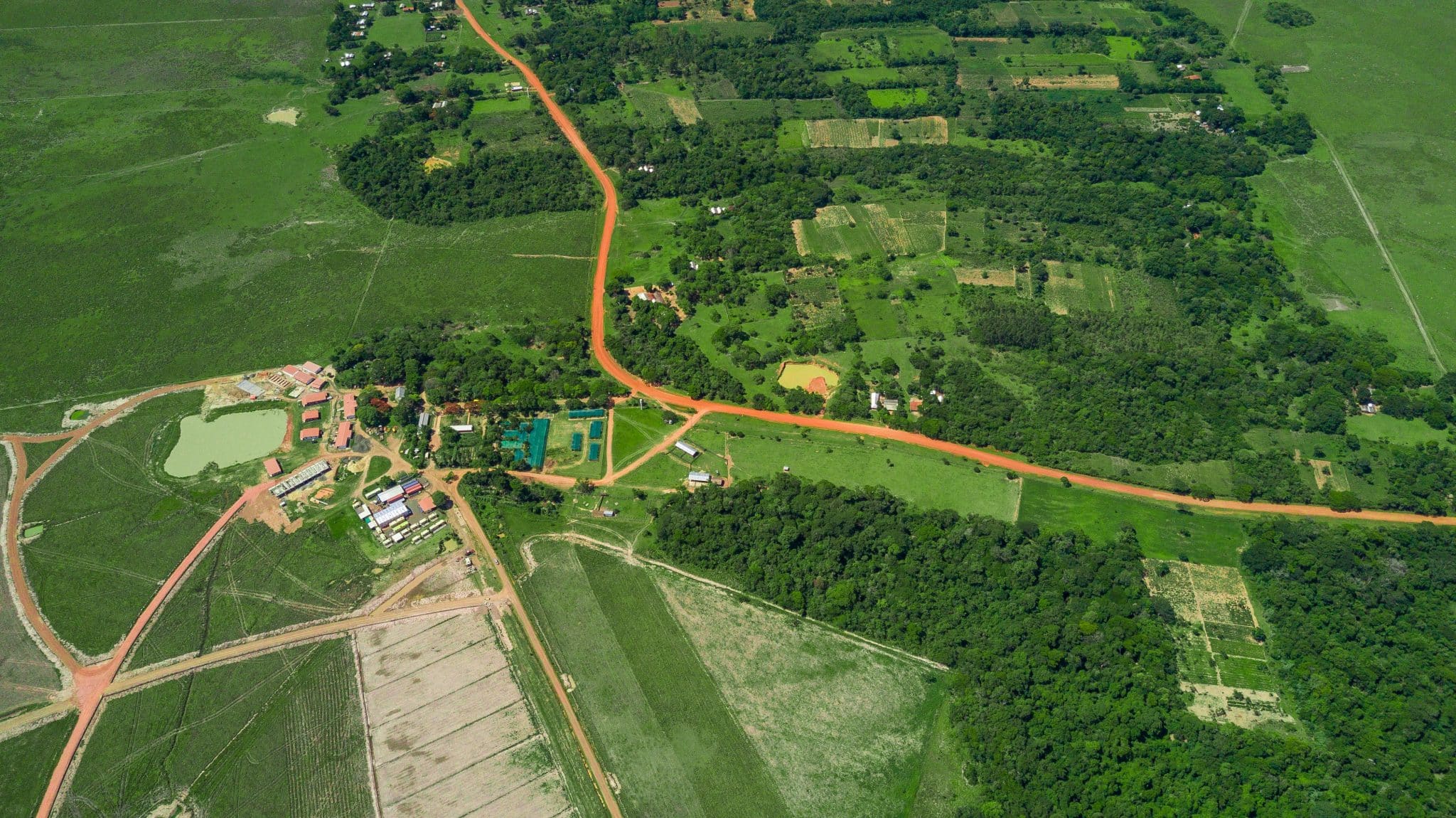 About 60 km (37 miles)  of the almost 100 km (62 miles) of planned roads have already been completed. Each sold plot is accessible during all weather conditions.

El Paraíso Verde will feature canals, a river (a canal with 60 to more than 300 feet width), and a complex lake ecosystem. More than 15 lakes will be dredged, each 2.5 to 30 acres in size.

In addition there are many smaller lakes and ponds, which are planned by our landowners on their own properties. About 10 of these private lakes have already been created.

A total of about 40 hectares (99 acres) of lakes, rivers and canals are planned within the settlement area.

Many lakes and canals are interconnected. At their widest these canals can measure about 20 meters across (66ft.) This is why we call them rivers, even though the waters remain calm. After completion of the waterways, it will be possible to travel by boat to almost every district of the settlement.

The connected lakes and canals are accessible to all inhabitants of El Paraíso Verde. With regard to the privacy of those residents with shoreside properties, and to respect nature, the waterways will be open to all for swimming, kayaking and all noiseless forms of watersports.

You will essentially be able to take your boat out to Chinampa Village or later to the city of YPY for a cappuccino. If your property is situated on such a connected waterway, you can boat directly from your house to the café-restaurant. 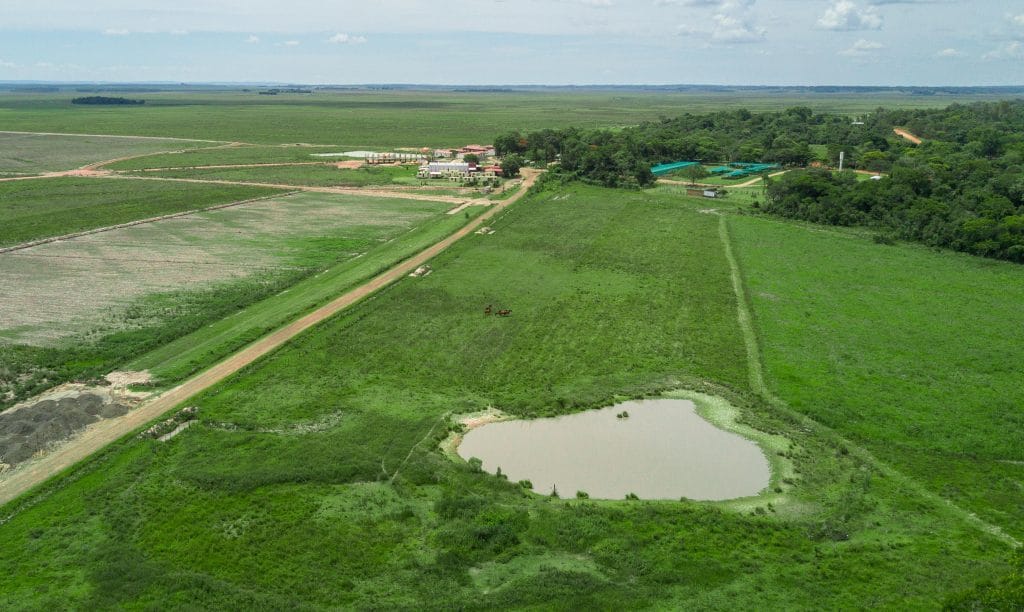 El Paraíso Verde holds a green gem – an “unlooted virgin jungle.”  In the south and center of Paraguay almost all primeval forests have been robbed of their old noble wood trees. These were manufactured into windows, doors, roof trusses and furniture.

El Paraíso Verde has about 40 hectares (almost one hundred acres) of natural jungle with many trees that are older than 500 years, some even about 1000 years old.

This unique jungle is privately owned by the founders Dr. Erwin Annau and Sylvia Annau. However, it was made available to ALL inhabitants of El Paraíso Verde as a recreational area. For meditation, walking, jogging, horseback riding, etc …. 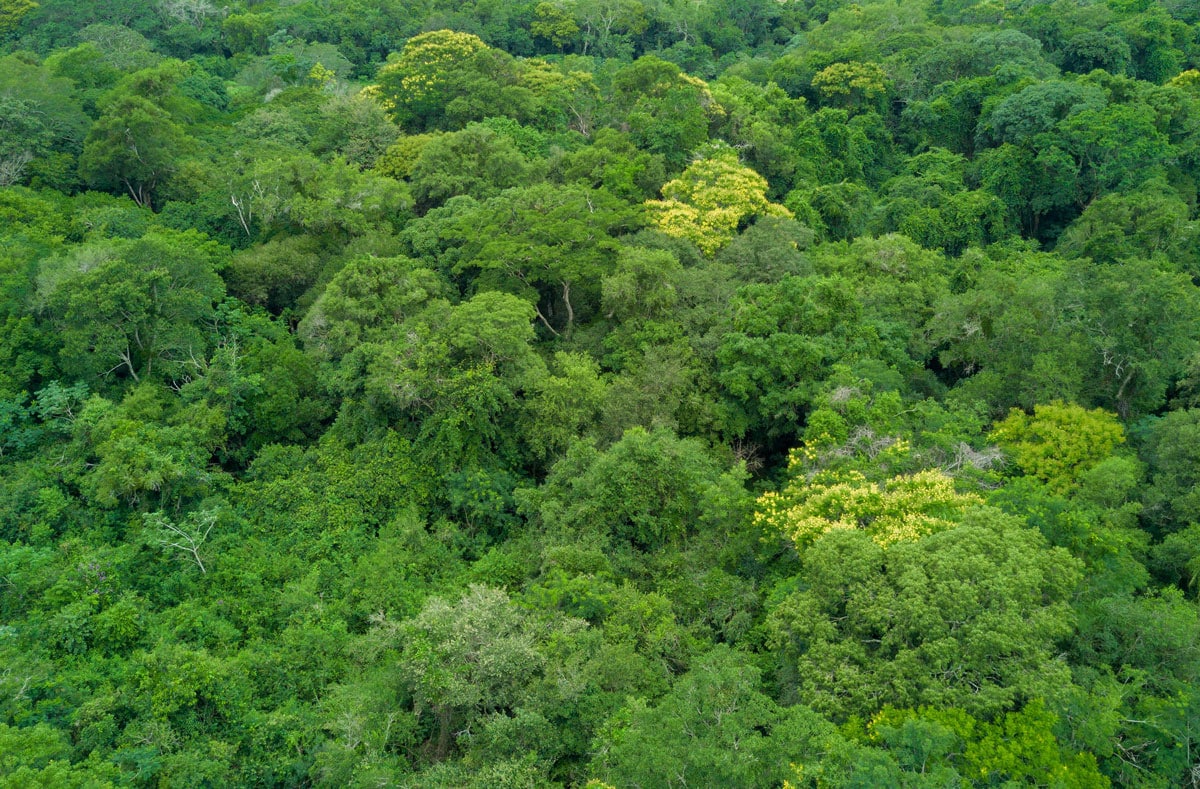 Another jewel of El Paraíso Verde is the Madonna Forest.

Ancient trees and a magnificent tree circle stand in this park sanctuary of more than 2 hectares (about 4,5 acres).  The “rebirth energy” permeating this forest and the circle of trees was determined by the world-famous shaman Mag. Peter Fischer. It creates an ideal place for meditation, “to reflect on the essential”, to take a walk,  or to  meet with friends. This forest, privately owned by the founders, was also dedicated for use as a recreation area for all inhabitants of El Paraíso Verde.

THIS is ALL INCLUDED (! ) for our residents. 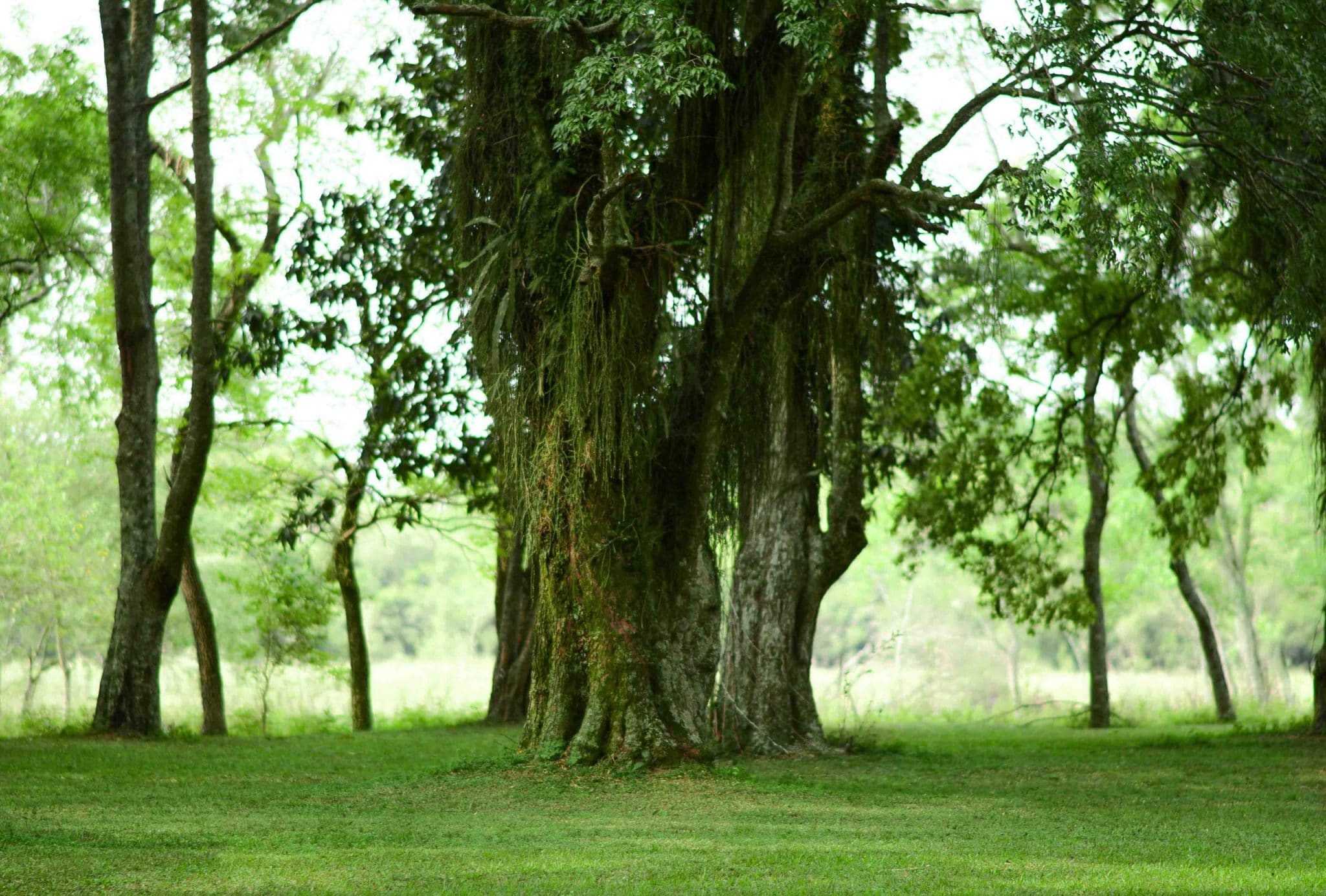 The towns and villages of El Paraíso Verde

It is not only recreation areas, tranquil forests and water landscapes that make El Paraíso Verde unparalleled in the world.

The planned city center and villages, the first of which is currently being built, bear witness to the insight and thoughtful concept of its founders. There are no straight lines and no right angles. The design is fluid and developed with rounded, natural lines. This emanates a completely different energy than other, modern housing developments.

The Pueblo Chinampa (working title) is already in development. Streets and squares have been mapped. In 2020 the Chinampa Lake will be dredged. After that, construction work will begin in the center of the village. A lakeside plaza with year round outdoor seating as well as a café, restaurant, shops and a brewery are all being planned. 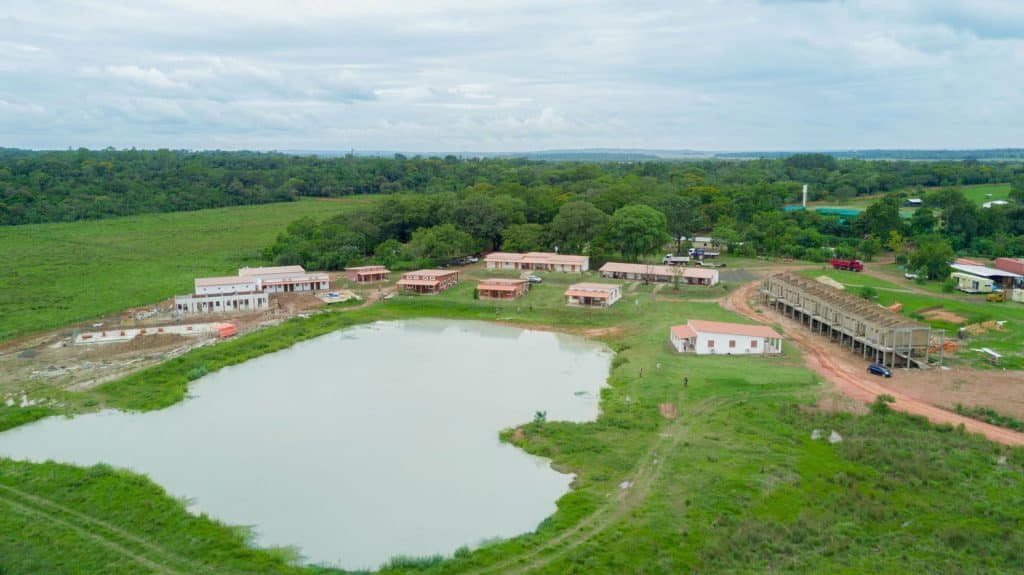 Economically, El Paraíso Verde will be 85% self-sufficient in regular times and 100% self-sufficient in times of crisis. Food, water and energy will be all produced on the estancia. Therefore, a commercial zone of almost 15 hectares (37 acres) was planned at the large north-east entrance.

The first enterprises with innovative inventions from all over the world will establish production facilities here. El Paraíso Verde will be a showcase project for environmental technology. This is aided by very low taxes, very low social security costs, low wages, but a population that is industrious and willing to learn. Many international corporations have moved their headquarters to Paraguay with its stable 5% growth of its gross domestic product, a stable currency since 1945 and inflation rates between 3,5 and 5% per year. 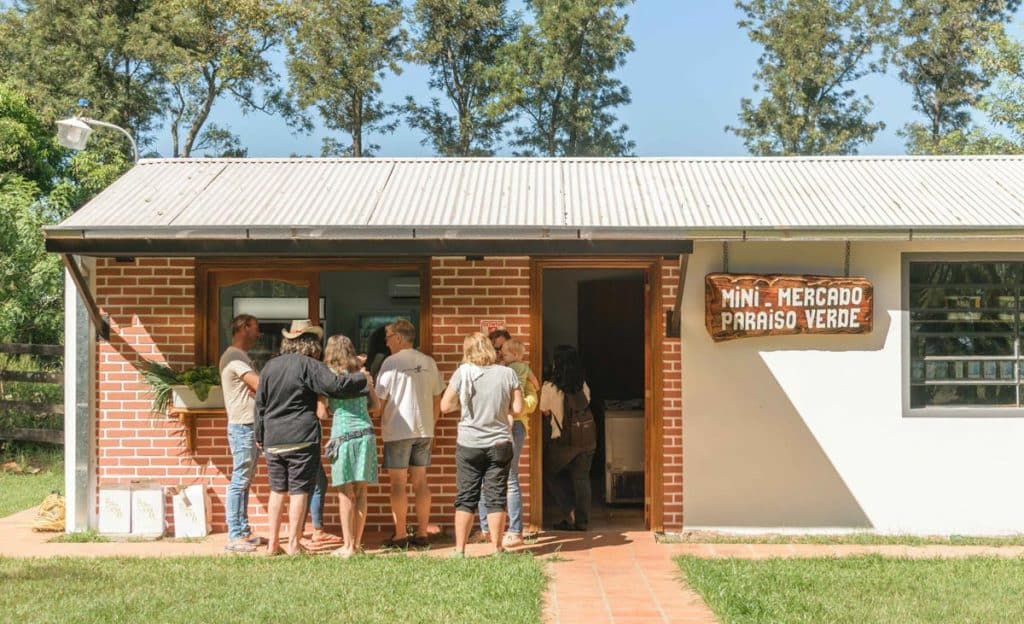 This health center was the initial spark for the emigration of the founders, Dr. Erwin and Sylvia Annau.

Planned in PIRA TAVA, the already established and almost finished village in El Paraíso Verde, it will offer a new home to naturopathy and alternative health practitioners.

Paraíso Verde will  provide a new type of living for people from all over the world. 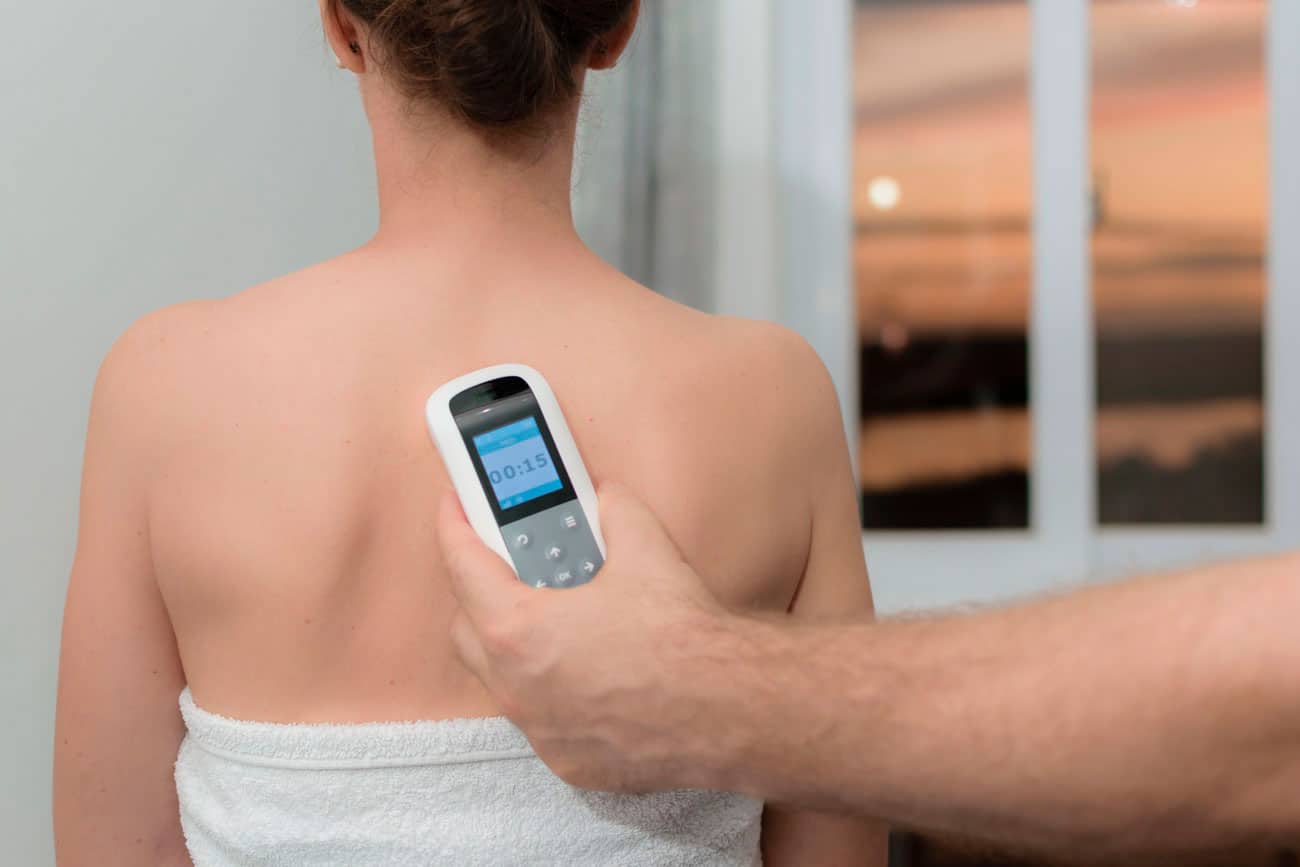