WE ARE FAMOUS OVERNIGHT

We are famous, but please….. no star hype…, no paparrazzi, no groupies, no autographs either please…… We are normal people, just like you ( I mean you, the other normal people ).

Actually we just wanted to come to Paraguay to have our peace and do our thing, but who has peace if he wants to do something positive for other people? Not yet happening on Planet Earth.

For a few days now we have been getting advertising that cannot be paid for with many millions of Euros or Dollars. The initial media campaign „against us“ in the Guardian cost those, which actually believed to be able to harm us with it a high 6-figure dollar amount.

And then we came on TV, Tagesschau, Spiegel, Stern, even Time Magazine…. Meanwhile you can read about us in Hungarian, Norwegian newspapers and everywhere in big articles.

Our message is getting across everywhere, despite the shoddy research of these „journalists“.

Everyone now knows where to go if he or she has had enough of the monkey business of Europe, Canada, Australia or some states in the USA.

And this is what the advertisement of Guardian und Co caused on our website:
1000% more clicks than before!! 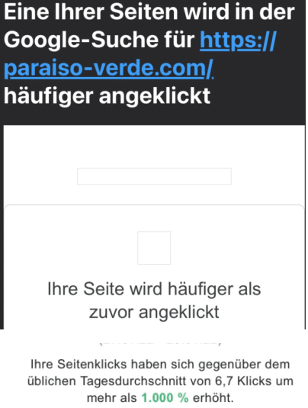 Even from Argentina, Chile and other South American countries we get inquiries from people who want to emigrate to us.

We even get enquiries from Paraguay from Paraguayans who would like to acquire a property at EPV. Of course: Everyone goes through the same selection process. El Paraiso Verde is international.

I think this support for El Paraiso Verde was probably not planned that way by the dark side. By the way, in the last 3 days 4 new families have arrived safely.

The funniest thing was the article in the Tagesschau.

One reads textbook attempts of the propagandists to throw everything with everything into a pot to cook from it a stink broth. This unfortunately has only one hook: 90% of humans can see through this smear journalism. To throw Nazis-Mengele- and Paraguay in a pot, one must have an I.Q of under 70 to fall for it.

Guardian claims that we have cut El Paraiso Verde out of the “fertile red soil” of the region. The would-be journalist must have confused the fertile red vulcanicsoil of Hawaii with the dead, infertile clay of Paraguay. But who cares about Main Stream Fake News….. Fortunately we have plenty of fertile HUMUS on top of the clay.

It was a feast to see the Fake News reporters being kicked out in Hohenau. Congratulations to all the German emigrants in Hohenau! Super job !

Now you know why we have a closed condominium (gated community, barrio cerrado) with fence and guards: To keep this insanity outside.

That’s why the 2 reporters from the Guardian stayed outside of our gate and wonder why we didn’t let them in. We haven’t laughed that much in a long time.

A main stream media – reporter is not interested in reporting facts.

He already has the negative-bias story ready on assignment BEFORE he contacts the person he wants to report on.

Therefore, DO NOT do interviews with main stream media, or you will afterwards appear in the sleezy, negative article like an idiot.

“Who always lies, one does not believe, because he will never speak the truth.”
(Dr. Erwin Annau).

By the way: ABC Color came in to El Paraiso Verde and reported truthfully about our project.

Likewise, presidential candidate Santiago Peña clarified in the country’s largest daily newspaper, La Nacion, that the Cartes family is not involved or invested with us. We are politically independent and therefore we support politicians who advocate for our project. 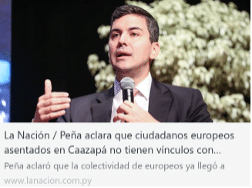 We went to the poorest area of the country so that we could create a positive effect for the economy and the people of the region. The easier way would have been to do business in a big city.

We now have 560 employees and are currently we are gearing up to 35 construction sites.

We are not corona deniers:

According to current mainstream science, viruses exist and so does the Corona virus (flu virus). We insist that everyone has the right to freely choose their treatment (and the treatment of their children).

This is stated in the Constitution of Paraguay. We have had excellent success with the two generic drugs known worldwide, but also with natural herbal substances and homeopaticas from our EPV alternative practitioners and from a Paraguay-based herbalist.

We are not anti-vaccination, but advocates of the right of choice over the substances someone gets into their body. Everyone must do their own research to determine if they want to accept the vaccinations into currently being offered into their body. The integrity of one’s body and the free choice of treatment are enshrined in the Constitution of Paraguay and they are an inalienable human right.

Therefore, we are against any compulsion to vaccinate – directly, indirectly or through bullying.

Paraguayans are a people who defend their fundamental rights – Paraguay, the land where freedom is lived. Therefore, in the end, law and the Constitution will prevail in Paraguay.

We have nothing to do with the right, the left, religions or ideologies. We reject any racism from our deepest conviction. This has already been made clear many times and does not need to be reported again.
Whoever wants to spread extreme right-wing or left-wing ideas and whoever practices religious intolerance (regardless of religion or ideology) or wants to proselytize others, will not stay at El Paraiso Verde.

MESSAGE to all who want to come soon

Message to all who are concerned about the unconstitutional, CURRENT immigration vaccine mandate:

Take note that worldwide, corrupt executive branches are committing blatant injustice in the full knowledge that the Judiciary branch (Courts) and Legislature (Parliament) will take time to correct this injustice.

Just like the robber who hits his victim over the head and robs him. He does not ask whether his action is according to the law. But until the criminal court sentences the man, the civil court awards damages to the victim and if necessary parliament adapts a law to better prevent similar acts in the future, time passes.

We have had 2 construction shutdowns, one of them 4 months, we have had 10 months without a bank account, 4 times we have started over, 3 floods, 4 major fires and we are still here and bigger, better, nicer and financially better positioned than ever before.

Even during the total lockdown, the first settlers came to EPV just 2 weeks after we started. So don’t throw in the towel. That is exactly what the dark side is speculating on.

Rebook your flights and come when the entry requirements for your entry fit again. Justice always wins in the end.

But let’s stick to the essentials:
LIFE IN EL PARAISO VERDE
a new video format is introduced

SETTLERS – VIDEOS
a “shot from the hip”

This video series is mostly filmed by settlers. Sometimes our Ronnie comes along, films and interviews settlers unprepared and spontaneously.

We have deliberately edited these videos only very roughly, so that we preserve the authenticity. Therefore, they are not as “professional”, “polished” as other videos, but a capture of the moment. These videos also don’t have the usual NEWS- signation.

So, we believe, you will get a better impression how life in El Paraiso Verde really is.

Those who are stressed may just look into these videos, but many will simply enjoy watching these videos to relax. The accompanying text will also help you to decide how important such a Settlers video is for you.

The first video should be watched especially by teenagers who will come to us with their parents. Young people up to 30 often ask us if there are settlers of their age here. So far, we’ve done far too little to introduce this age group. Now our teens and twens are getting active themselves.

A barbecue party spontaneously called by Tobias at a campfire with guitar music – pure romance.

For the first time, teenagers have their say. They tell from their point of view about their feelings, their experiences and their fears in the “madhouse of Germany” They tell about masks, vaccination, schools with distance rules and about the difference they experienced in El Paraiso Verde.

They also talk about their experiences with other teenagers in El Paraiso Verde. Their stories about good and bad days that everybody has anywherein the world are deliberately not edited, so that we can show the teenagersthat may come in the future as realistically as possible what life in El Paraiso Verde means.

Nothing is always good or always bad, only your own attitude tilts reality to one side or the other. This is not Hollywood, not a soap opera but real life at El Paraiso Verde.

COME as soon as possible!