Our popularity is on the rise!

Last week one of the biggest TV stations in Argentina, telenoche was with us. They were allowed to film and interview settlers in English and Spanish. The coverage was positive, although telenoche is part of the main stream media sent out to report negatively about us. “the colony of the chosen anti-vaccinationists.” Should sound negative, but for the Main Stream press the report was another shot in the knee:

Views of our videos are now up 230% in the 28 day period. Requests come from USA, Canada, and thanks to telenoche from Argentina, as well as from other South American countries. 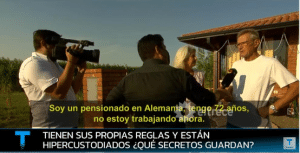 Media that we know will certainly not report objectively are ignored. Even the ORF wanted to report about us. No interest. Their report is surely already finished. Even in the Standard (in Austria) we were already. Without asking us or finding out facts from the source. Instead of the Östrreicher are proud of one of them, which moves something….. But this is Austria.

This is what we bring about together with the patriots of Paraguay (from all political camps): 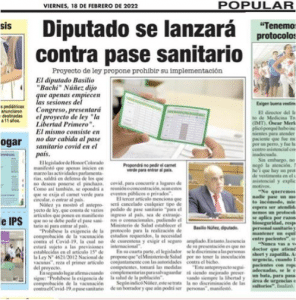 Congressman will launch a campaign against the sanitary pass. Bill to prohibit its implementation

Congressman Basilio “Bachi Nuñey said that as soon as the congressional sessions begin, he will present the bill “Freedom First”. It consists of not allowing the covid sanitary pass in the country.

Adrian and Linell came to Paraguay to look around and settle “somewhere in Paraguay.” Just like more and more emigrants, they soon realized that it is better to live in a community with like-minded people. So they came to visit us. They did the obligatory info week and the chemistry was right.

We discussed the vision of a raw food restaurant that had existed since the beginning of the El Paraiso Verde project and, when we agreed, within a very short time we had renovated the kitchen of the old mansion. There the “Vitaleria – El Paraiso Verde” comes in. This will give our settlers and guests even more choices for their healthy diet. All our food is organic. Every day we have a big salad buffet and vegetarian dishes besides the meat that is obligatory for Paraguay (100% organic, 100% from our own production). Raw food cuisine is much more than just salad, but then you can enjoy that here at El Paraiso Verde.