Developments in Europe and our preparation

It is difficult to forecast developments in Europe without looking like an “alarmist”. On the other hand, looking away is not a survival strategy either.

Let us hope that things will not be quite so bad. The Great Reset is currently being carried out in Europe against all resistance: a planemiec, a banking crisis, an economic collapse with collapse of supply chains, war and finally the reset: always the same game. And this time it is supposed to be the “Great Reset”. The reset of all resets into complete enslavement and dehumanisation. “Interensting” prospects….

NUNCA MAS – never again
We were asked why the recent (now lifted) mandate to enter Paraguay only with proof of vaccination could “happen” . Simple: all over the world, members of the executive branch (governments, agencies) break laws and constitutions, knowing full well that their orders will not hold in the long run. It takes time until the LEGISLATURE (Parliament) or the Constitutional Courts can repeal such unlawful and unconstitutional orders. However, this only works if the people resist. And that is the case in Paraguay.

We will not allow our freedom to be restricted. It is naïve to believe that the dark side will not “shoot back”. Then we have to keep our cool: Don´t freak out, don’t lose heart and do the right thing. It was important to us that this order not only be lifted. That could have been done in two weeks. We wanted a law with a constitutional majority that would make such mandates impossible in the future. After all, the law is called “nunca mas” – never again. Four hours after opening our borders, Brazil followed suit. Eight hours after that, Argentina. We are turning this upside-down world around again.

It looks like we will get many more excellent doctors and alternative practitioners in El Paraiso Verde. Therefore, we (Erwin and Sylvia as owners of the land that has NOT been sold yet) have donated a much more attractive place for the health centre in El Paraiso Verde. Market value: more than 1 million Euros. Details will follow.

Current situation in Paraguay with regard to the WHO “Planemic Pact”
Already 2 weeks before Bolsanaro’s declaration, Members of Parlament in Paraguay agreed across all party lines that our parliament would never ratify such a treaty. Ratification is the approval of an international agreement signed by a member of the government. Without ratification of such a treaty by the legislature, it is null and void.

Even IF a Health Minister or even the President would dare to jet to Switzerland and sign this paper, it would never become law in our country. It would require a constitutional amendment and a 2/3 majority vote. Whoever signs such a paper could possibly be charged with high treason in his home country.

Russia is currently considering the only correct step:
Russia plans to withdraw from WHO globalism and WTO!

The Russian government is starting a series of withdrawals from international bodies, including the World Trade Organisation (WTO) and the World Health Organisation (WHO), Russian Duma deputy speaker Pyotr Tolstoy said on Tuesday.

Russia’s international obligations and treaties, “which do not benefit our country but harm it,” must be reviewed, he said. The Foreign Ministry has sent the State Duma a list of such agreements,” Tolstoy said. This will be analysed and then the withdrawal proposal will be submitted.
https://aktuelle-nachrichten.app/russland-plant-austritt-aus-who-globalismus-und-wto/

Assessment of the situation in Germany by members of parliament in Paraguay
We were informed by members of parliament in Paraguay that they expect that emigrants from Germany will hardly or not at all be able to get out of Europe in the foreseeable future (like in the early 1940s in the Third Reich). Therefore, anyone planning to say goodbye to the “madness of Europe” should plan rather short term.

Planning for months is possibly optimistic. Those who only want to start selling their house after the Info Week should also reconsider. The list of banks with which Parauay no longer cooperates because of their money laundering offences is getting longer and longer. A capital transfer could encounter unexpected difficulties.

Raising interest rates on loans has forced a lot of potential buyers out of the market. Consider this: an increase in interest rates from 1 to 2 per cent is an increase of 100 per cent in the cost of the loan. This is a knock-out criterion for many for debt financing, especially of more expensive properties.

People buying properties with full bank accounts are becoming rare. This is a summary, formulated as gentle as possible, of many conversations I have on an ongoing basis with our prospective settlers. The list of those who cannot sell their property, or can only do so with difficulty, is getting longer.

In addition, there is the amendment to the German real estate law, the property register…

No matter how you assess the situation, we at El Paraiso Verde have to prepare for the “settler-tsunmi”. And that is what we are doing about it.
___

Construction machinery
In the last 6 weeks we have invested over 500,000 Euros in machinery and tools. These are just a few examples: 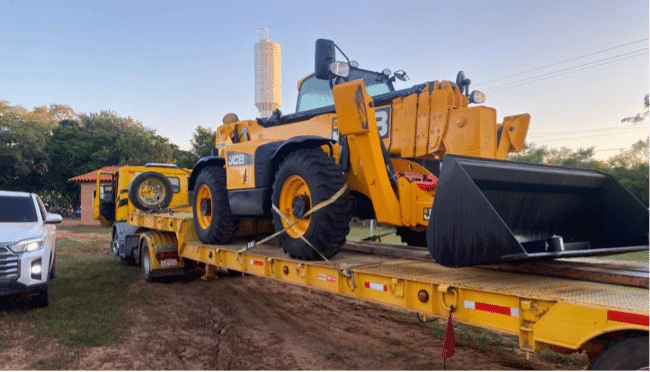 TELESKOPE – Handler: This large device can lift large loads (e.g. more than 1 m3 of clay or concrete) up to 16 metres or high. With it, we can build multi-storey buildings and sirewall buildings much faster. What else you can do with it is shown by a few of our “girls”. Good that Paraguay is a free country…. 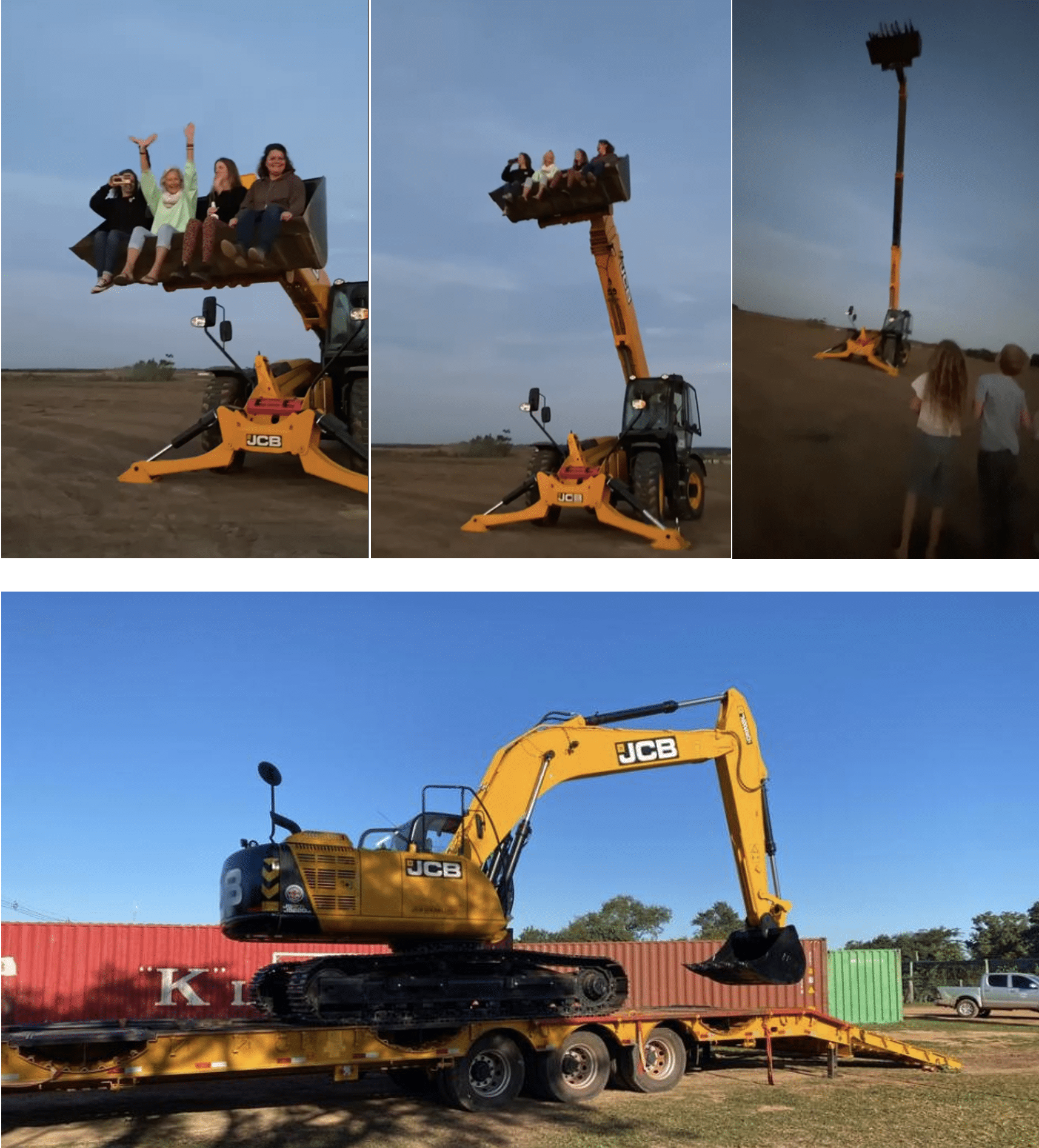 THE FOURTH Excavator: this is the 4th BIG excavator of RELJUV S.a.e.c.a. We also have a lot of smaller excavators. This JCB weighs about 23 tons. Including an excavator being rented when needed, there are now 5 big excavators working in EPV. Lago del Corazon is being dredged, canals are being constructed and the big dam is continuing from the settlement area to the southern tip of El Paraiso Verde. We currently have a record number of new house platforms being built for new settlers. (Note the deep blue, streak-free sky – no photoshop…) 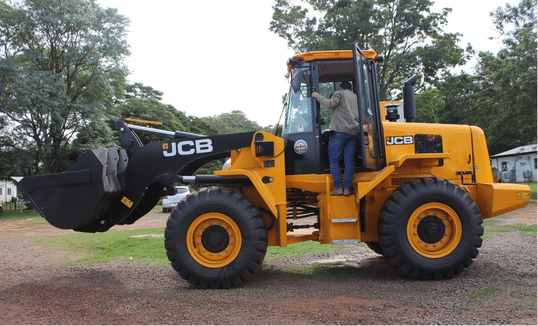 WHEEL LOADER: This large wheel loader is mainly used for dam construction work, but due to its versatility and speed of use, it is needed at all construction sites in the EPV.

CASAS LIBRES: the first 3 “Casas libres” are ready. The first one has been occupied since 10 pm on Thursday. Here the last work is being done in the beautiful new hotel rooms.

SIREWALL
The 2nd wall of our Sirewall show house is finished. The quality of this 2nd wall is already close to our target and the speed has more than doubled. Afterwards we will build “terraced houses” (flats with bedroom, children’s room or office, bathroom, living room and terrace). After that we will have optimised quality, speed and costs. The construction site container for tools and materials looks great, doesn´t it?

INFO-WEEK
We have 53 travellers at the info week that started on 19.5.2022. The first two Spanish speaking families (one from Spain, one from Chile) have arrived. We are becoming international. By the way, I had my first Skype interview with a family from Japan – luckily not in Japanese!

Families who have been to Info weeks before now arrive with One-Way-Trip. Among others, Hans and Inken, who became “famous” as one of the families who left Europe and then, due to the (illegal) regulation introduced overnight, could not enter the country because they lacked proof of vaccination and had to fly back. Yes, it can happen that quickly in times like these.

But now they have arrived – unvaccinated – and are happy. We are already looking forward to their music school. A professional drummer came with his family and studio equipment. The only thing standing in the way of the first “EPV-STOCK” music festival at EPV are the currently cold nights. But next spring will come for sure. 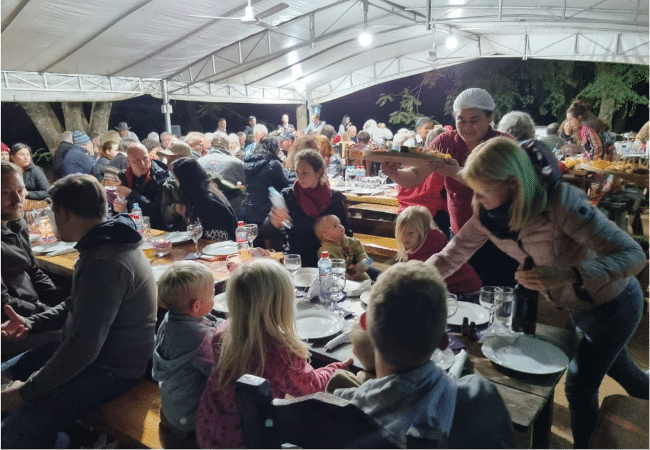 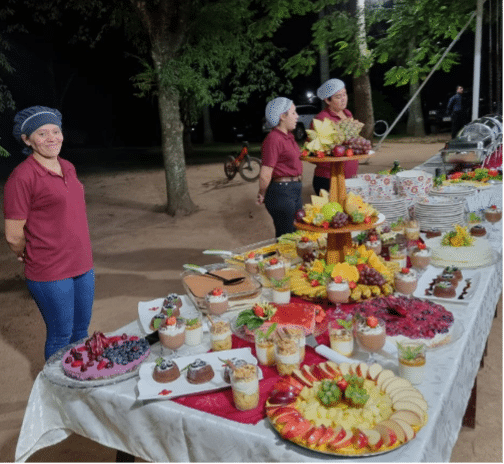 It’s beautiful here at EPV. A few impressions from our last asado with 125 participants and again with an “intergalactic” buffet and music. 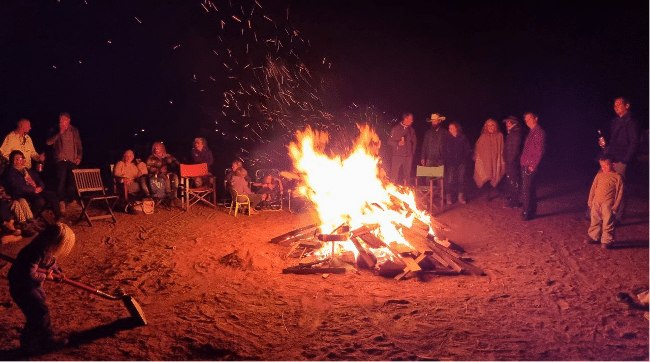 Please send applications with curriculum vitae, certificates and proof of employment to
info@paraiso-verde.com